This is something I have to have when I come back to Iceland after travelling.

Well – actually, I know it´s not just me.
At least my family feels the same way including my parents.

Funnily enough, they just flew in yesterday morning as well.
They weren´t in Canada with us – they were in Spain.

I called them on my way to the fishmongers to see if they wanted to come over for dinner, but they had already been to their fishmonger to get exactly the same thing.

I wonder if it´s just something “we do” or if this is the craving people get after being away, whether it is for days, weeks or months?

I might also have to do with the thing that no matter how much airlines try to glorify their menus – what they serve never actually tastes like food.
I can´t imagine what has to go on to kill food – even just an innocent looking sandwich – as much as airline companies do.

You can get readily panniered haddock at every fishmongers and in most supermarkets.
I usually make my own breadcrumbs, because to be honest – I don´t really think the “yellow stuff” is all that good for you. Neither is the remoulade you buy ready made.

But….after a long flight, with not a lot of energy left to make either breadcrumbs or remoulade, this tastes like heaven.

I often buy it all separate – the fish and the crumbs that is.

That way I can be a 100% sure that the fish is fresh. I also think it tastes a lot better, even if it is the same kind of breadcrumbs ( I don’t even think it´s “real” breadcrumbs….I mean – why so yellow??) as they have on the already panniered fish. The crust is way better when you do it yourself and the crumbs haven´t been softened by laying on fish all day.

And there´s just something about apples and onions that goes so well with this. 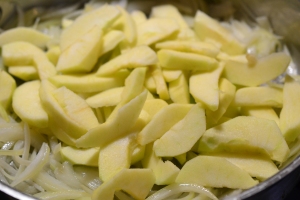