After my disaster last night with heating a jar of sauce, I decided to do it the way I usually do when I need a simple tomato sauce without having to stand and stir it for hours.
It´s just about as easy as opening the jar anyway, although it does take longer time.
Still, there´s not a lot you have to do. 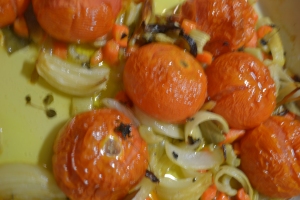 Chop up onions, celery and carrots. Throw in a few tomatoes and bay leaves as well as some good herbs.
I usually just use whatever I have on hand. In this case, it was fresh oregano.
Rub the lot with some good quality olive oil, put in the oven at 150 degrees celsius and leave it there for 1 1/2 – 2 hrs – or till the tomatoes are nice and soft.

Put it in the food processor and reheat in a pot.
Check for seasoning – add a little sea salt, pepper, a pinch of sugar and some tomato paste to add flavor. 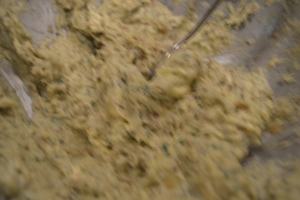 I made up the rest of the ravioli stuffed with my aubergine filling.

I had already cooked the aubergines Sunday night so the rest was easy.

The aubergines only need to be pricked with a fork – so that they let some of the steam out – and put into a really hot oven till they´re soft. They will get a little dark on the outside, but as long as they don´t catch fire, they are all right:) You´re not going to be using the skin anyway.

I had a couple of beautiful purple aubergines – organic ones that weren´t very big.

Roll out the pasta dough and cut it in circles – either with a pasta cutter or a glass if you don’t have one.
Let the pasta dry out a little, and then start stuffing:) 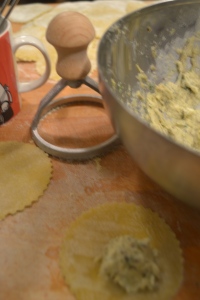 It´s good to brush the pasta with a little bit of cold water before you put the filling in.
That way, the filling does´t leak out while you´re boiling the pasta.
Some people use egg wash, but water will easily do the trick. 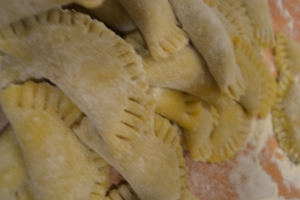 I usually don´t measure accurately when I make the dough.
Besides, it all depends on how dry and fine your flour is.
I´ll try remember to measure next time so I can give you a more accurate recipe!

Into that went 9 egg yolks, 2 or 3 eggs, some olive oil, and cold water. And sea salt of course:) 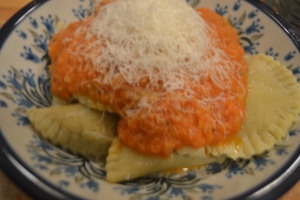